About Us - Get to Know Your Founders 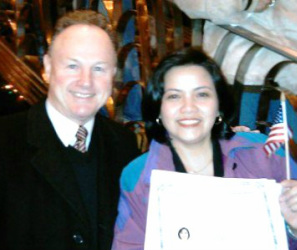 Many challenging things have happened the last few years in this nation and the people here have been subject to extreme hardship through both natural and geographical calamities.  But even more important than this is the fact that this Island Nation is so strategically located that many have called it the next Asian tiger and a launching pad for international influence.

Just a short airplane trip away is the largest populated nation in the world.. Right next door is the largest Muslim nation in the world..  Every way you look at it (up, down, to the left, to the right) are all the nations in the 10/40 Window.  Do you realize that the distance to Bangladesh is similar to a flight from San Francisco to Chicago or to China is as short as going from Los Angeles to San Francisco.  Help build this launching pad to Asia and beyond.

Tagaytay International Institute and Study Center is based at the FMI Center in Crossing Mendez West, Brgy. Patutong Malaki South, Tagaytay-Mendez Road and is an arm of FMI Global Ministries, Inc.

David and Mitzu have worked together in the Philippines for more than 15 years.  Originally from Tagaytay they began on the island of Occidental Mindoro with programs for children and the youth of the families of village farmers and fishers.  Over the years they have organized medical / dental missions, malnourished children programs, school-supplies for numerous villages, mountain tribal projects, school repair, training courses and much more.  Now they are back in Tagaytay for the last 6 years to setup the FMI Asia-Pacific Mission Center.

Mitzu's extensive experience in administration and all manner of operational logistics has prepared her for the multi-faceted work at FMI.  David's international experience in Korea, China, Russia and elsewhere helps him to set the vision and direction for the Tagaytay operations.  Mitzu's training in the medical field, financial and managerial experience enables her to care for a wide-scope of activities.  David's work with the United Nations Association and other international organizations plus his education in Theology, Political Science/Int'l Relations and MBA from Moscow, Russia give him the scope to guide FMI.  David and Mitzu have one daughter Natalie who is following in their footsteps even though she is so young.

The word creed comes from the Latin credo which means "I believe." In the Church the creed is usually called The Symbol of Faith which means literally the "bringing together" and the "expression" or "confession" of the faith.

In the early Church there were many different forms of the Christian confession of faith; many different "creeds." These creeds were always used originally in relation to baptism. Before being baptized a person had to state what he believed. The earliest Christian creed was probably the simple confession of faith that Jesus is the Christ, i.e., the Messiah; and that the Christ is Lord. By publicly confessing this belief, the person could be baptized into Christ, dying and rising with Him into the New Life of the Kingdom of God in the name of the Father, and of the Son, and of the Holy Spirit.

As time passed different places had different credal statements, all professing the identical faith, yet using different forms and expressions, with different degrees of detail and emphasis. These credal forms usually became more detailed and elaborate in those areas where questions about the faith had arisen and heresies had developed.

It was the definition of the council which the Emperor Constantine called in the city of Nicea in the year 325 which was ultimately accepted by the Church as the proper Symbol of Faith. This council is now called the first ecumenical council, and this is what it said:

We believe in one God, the Father Almighty, Maker of heaven and earth, and of all things visible and invisible. And in one Lord Jesus Christ, the Son of God, the only-begotten, begotten of the Father before all ages. Light of Light; true God of true God; begotten, not made; of one essence with the Father, by whom all things were made; who for us men and for our salvation came down from heaven, and was incarnate of the Holy Spirit and the Virgin Mary, and became man. And He was crucified for us under Pontius Pilate, and suffered, and was buried. And the third day He rose again, according to the Scriptures; and ascended into heaven, and sits at the right hand of the Father; and He shall come again with glory to judge the living and the dead; whose Kingdom shall have no end.

Following the controversy about the Son of God, the Divine Word, and essentially connected with it, was the dispute about the Holy Spirit. The following definition of the Council in Constantinople in 381, which has come to be known as the second ecumenical council was added to the Nicene statement:

And [we believe] in the Holy Spirit, the Lord, the Giver of Life, who proceeds from the Father; who with the Father and the Son together is worshipped and glorified; who spoke by the prophets. In one Holy, Catholic, and Apostolic Church. I acknowledge one baptism for the remission of sins. I look for the resurrection of the dead, and the life of the world to come. Amen.

This whole Symbol of Faith was ultimately adopted throughout the entire Church. It was put into the first person form "I believe" and used for the formal and official confession of faith made by a person (or his sponsor-godparent) at his baptism. It is also used as the formal statement of faith by a non-Christian entering the community of the Church. In the same way the creed became part of the life of  Christians and an essential element of the Divine Worship of the Church at which each person formally and officially accepts and renews his baptism and membership in the Church (Christ's Body). Thus, the Symbol of Faith is the only part of worship (repeated in another form just before Holy Communion) which is in the first person. All other songs and prayers of the should be plural, beginning with "we". Only the credal statement begins with "I." This, as we shall see, is because faith in Jesus is first personal, and only then corporate and communal.

To be a Christian is to personally accept, confess and receive into the center of your life Jesus Christ (to turn from the old life of sin and death and proceed to follow Jesus - 'repent').. that He may dwell in your hearts by faith and at the same time to affirm the basic truths of the Christian faith -- not merely the words, but the essential meaning of the Creed (symbol of faith). Then to follow the Lord in waters of baptism and be born of the Spirit (Jn. 3:3&5) It means as well to affirm all that the creed implies, and all that has been expressly developed from it and built upon it in the history of the Church over the centuries down to the present day.